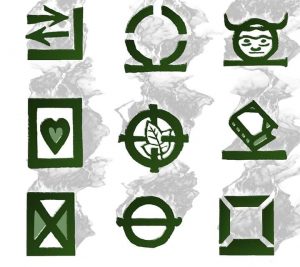 “The Divine Messenger* said: These are the nine entities; or according to the ancients, Jehovih and His eight children, His Sons and Daughters. And these are the same which in all ages poets and philosophers have made to speak as, THE FAMILY OF THE UNIVERSE. Through them I speak. Jehovih is the Light, that is, Knowledge. The manifestation of Knowledge in man is Jehovih. The growth of wisdom in man, as the earth grows older, is the TREE OF LIGHT.” – Book of Ben. 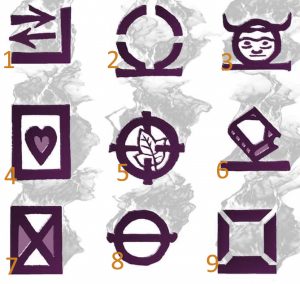 An explanation of the symbols on the tablet.

Each of these symbols, with the exception of the center, represent the sons and daughters of Jehovih. The symbol in the center represents the Name of Jehovih.

The three most significant are: Jehovih (Father), Corpor (Mother), and Tae (Son).

1. Esfoma. Represents the vortexian currents where souls enter at the death of the mortal coil.

3. Seffas. Represents the era or season preceding the Kosmon Era. The Seffas Era concluded in 1848 A.D.

4. Tae. This is the son or child of Jehovih. In Essene Faithism, it is often referred to as the Living Spirit, depending on the context of the scriptures. A symbol of a heart is used because he also represents the human heart.

5. This is the symbol representing the Name of Jehovih.

6. Kosmon. This is the name of the era that began in 1848 A.D., in which the vail of the spirit world was opened. In the 33rd year of the Kosmon Era, the Oahspe Bible was revealed by angelic messengers.

7. Hak. This represents the age preceding the Seffas Era. The Adamic race was created toward the conclusion of this age. This also represents darkness, ignorance, false understanding.

8. Corpor. This represents earthly matters, and the Divine Mother as she cares for her children who live on the earth.

9. Uz. He represents the material world and its population (the Uzians)

From the 1912 edition of the Oahspe Bible

Jehovih: And is equivalent to THE ALL HIGHEST LIGHT. The All Knowledge.

Tae: The word TAE is equivalent to the words, THE HIGHEST GENERAL EXPRESSION OF MANKIND, OR, THE UNIVERSAL VOICE WAS.

Uz: Uz is equivalent to THE VANISHMENT OF THINGS SEEN INTO THINGS UNSEEN. Uz is also equivalent to WORLDLINESS, or, world’s people.

Esfoma: Equivalent to THERE IS SOMETHING IN THE WIND; or, AS THINGS SEEM TO INDICATE. Signs of the times.

Es: Equivalent to, THE UNSEEN WORLD, also to, SPIRIT WORLD. The testimony of angels. Also spirit.

Ha’k: DARKNESS. Ignorance is ha’k. Darkness may be corporeal or spiritual. Dark ages; or, a time of anarchy and false philosophy.

Seffas: Seffas is equivalent to, THE ESTABLISHED, or, THE ENFORCED; as the laws of the land, or, the religion of the land, as established.

The Divine Messenger said: These are the nine entities; or, according to the ancients, Jehovih and His eight children, His Sons and Daughters. And these are the same, which in all ages, poets and philosophers have made to speak as, THE FAMILY OF THE UNIVERSE. Through them I speak. Jehovih is the Light, that is, Knowledge. The manifestation of Knowledge in man is Jehovih. The growth of wisdom in man, as the earth groweth older, is the tree of light. (The Divine Messenger’s Book of Ben)

Concerning the display of the Tablet, Mir Mahvar said: “It is suggested for those who are able, to put the tablet in an east window of their house. It is not a requirement, and some would not be able to do this because of unbelieving spouses, parents and other situations. You can keep the tablet on your person if you wish, but do not treat it as a ‘good luck charm.'”

* Older editions of the Ohapse used the term “God”, but the Essene Faithist use “Divine Messenger” in some of these verses to make a distinction.