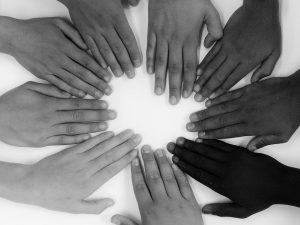 It was recently brought to my attention that there are a few individuals on the internet calling themselves Faithists, who at the same time are promoting racial superiority. I am familiar with who they are, and I can ensure you that these individuals are not associated with the Worldwide Faithist Association (Essene Faithists) [or the Church of Jehovih]. Our Association does not tolerate such blatant disregard for the teachings of the Oahspe.

Our Oahspe Bible is clear on the matter that while Faithists are set apart from the world, as humans our tribe, our race, our ethnicity, our nationality, our colour, or our gender does not entitle us to any special privilege or ranking in the Kingdom of the Creator. Racism and discrimination against genders are not about black, white, yellow, brown or red, or which gender is better than the other; rather, such ideas promote a lack of understanding concerning the Creator’s love for all humanity, especially those who call upon Him in truth and righteousness.

Obviously, some races in history have been great, while some others have not been so great. There are certain races or individuals that have excelled in technology, architecture, medicine and so on. This does not mean that a particular race itself is superior in every way to other races. There are individuals in every race that excel in some kind of talent provided by the inspiration of the Great Spirit, or through His angelic beings.

Anyone who teaches that a specific race or gender is to be elevated above that of others in Jehovih’s Kingdom are teaching falsehood and causing discord amongst fellow Faithists.

I want to make it absolutely clear that the Worldwide Faithist Association does not discriminate against persons because of their race, gender or sexual orientation. There is a place for everyone who comes to our doors who abide by the covenant in the Oahspe. Essene Faithists do not condone racism or discrimination of genders, and neither do we condone false religions that promote such worldly teachings.

As a family united in worship of the Creator Jehovih, we do not look upon others with an attitude of superiority. We do not regard one’s race, nationality, tribe or gender as lower or greater than that of our own. Jehovih is our Father and we are all His children, thus we are all brothers and sisters — one family.

May Jehovih bless you as you become united in His worship and continue cultivating loving-kindness towards people of all races, nationalities and genders.