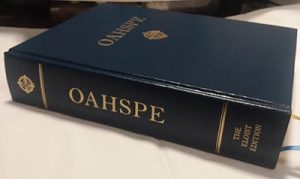 4. To corporeans I give corporeal eyes and corporeal ears, that they might attain to wisdom on the earth; but to a few I give su’is, that they may see and hear things spiritually.

5. To the spirits of mortals who die in infancy, I give spiritual eyes and spiritual ears; but without cultivation they hear not corporeal things, nor see corporeal things. But to such spirits as have fulfilled an earth life, I created them to see and hear after death the matters of both worlds.

6. Nevertheless, there are many spirits in heaven who have not fulfilled either a spiritual or a corporeal life, and they can see but little and hear but little; for which reason I commanded that they should be called drujas, signifying, spirits of darkness.

7. And I sent My Gods and My Lords, saying to them: Go ye to the spirits of darkness, for they neither see nor hear heaven nor earth, and are wandering about indifferent even to their own nakedness.

Verse 4 says that not everyone has the ability or gift to experience su’is. This does not indicate that apart from having the ability or gift to experience su’is can not comprehend spiritual things. As long as someone has spiritual eyes to see and spiritual ears to understand, whatever their gifts or talents, Jehovih provides a means for them to understand the necessary subjects that He knows they need to comprehend. The gift of su’is is given to very few people and can not always be equated with gaining a better understanding of the Scriptures. Su’is is often provided to a seer to instruct Jehovih’s people in deeper matters of the Oahspe as well as providing lessons and prophetic statements from angelic beings.

Verse 5(a) gives us some insight on “mortals who die in infancy” (and we can include still born and aborted babies in this category). Jehovih says that He still gives the spirits of these “spiritual eyes and spiritual ears.” However, as He says, without cultivation of what they observe and hear, they can not attain to a proper understanding of earthly matters. In cases such as these, it would be obvious that they have not had an opportunity to learn of technology, certain forms of entertainment, violence and other experiences that humans see every day. Through Divine Wisdom, I can assure you that those infants that died before or after birth, even though not having a knowledge of their surroundings, do in fact retain the experiences of the parent(s) that gave them loving care. They can recall the voices and faces of their mothers, fathers, grandparents and siblings, and they will recognise them when they meet again in the spirit world.

Verse 5(b) helps us to understand that those who have “fulfilled” their earthly life, their spirits are given the ability (after the death of the physical shell) to hear and see “the matters of both worlds.” The term “fulfilled” in this verse indicates those who were faithful in their mission and living a virtuous life according to the Will of the Great Spirit. These, Jehovih says, are given the ability to see and hear both earthly and spiritual matters after they pass beyond the veil into the spirit world. These spirits have the ability to observe activities on earth and in the spirit world. They can also help, if given an assignment from the higher celestial beings, influence and assist humans in their mission. For those spirits who still lack some essential knowledge to further their grades in the spirit world, humans can assist them. The manner in which this is accomplished is leaving a copy of the Oahspe open, or inviting (through proper preparation and prayer) these spirits to Faithist meetings so they can learn from the lessons provided to the congregation. The same can be accomplished by individual Faithists who read the Oahspe Bible aloud. The spirits who learn can then share with others spirits, thus aiding in the progression of grades.

In verse 6 we see a completely different type of spirit — one that has neither progressed (reached higher grades) in either the physical or spiritual worlds. In other words, as the Oahspe says, these “many spirits…have not fulfilled either a spiritual or a corporeal life.” In many cases, these are individuals that refused to act according to knowledge they were already given as humans. For this reason, Jehovih has “commanded that they should be called drujas.” This term indicates a person who is outside the light, or refuses to stand within the light of Jehovih. These individuals are stuck in a muddy, myre like world where they reside until a glimmer of hope is offered to them. However, these drujas can also cause problems on earth for those who are like them.

Verse 7 is an example of the Great Spirit’s love for all creation. He commands the Lords and Gods (higher celestial beings) to go to the drujas because they are “wandering about indifferent even to their own nakedness.” The term “nakedness” in this verse indicates “lack of knowledge” — in other words, they have not come to understand yet why they even exist in the shadowy world in which they have now entered after the passing of the physical body. (Verse 11 further indicates that the drujas do have the ability to obtain additional knowledge).

The Creator makes provisions for the living and the dead, on earth and in the heavens (spirit worlds). Jehovih’s love is so far extending that even the darkness can not overcome it. Even the most hateful person can be reached by Jehovih’s love and compassion.

Your sharing of the Message of Light is not only to living human beings, but also to the spirits of those who have passed beyond the veil. It is important to realise the significance of your dual mission as a human being, as a Faithist. Whatever talents you have been given, whatever level of knowledge you have received from your study of the Oahspe Bible and from others, regardless of the ability to experience su’is, you can share something with others about the hope of the future from Jehovih’s words.