1. God said: In the time of Osiris, thy Lord provided for the light and knowledge, that had
been with the I’hins, to be merged into the new races, the Ghans and I’huans. By the Lord
and his angels was such foundation laid.

2. Before this time, the I’hins could not inspire the barbarians to make leather and cloth;
nor could they inspire them to industries of any kind in the way of virtue and peace.

3. The Lord provided unto the inhabitants of the earth, oracle houses, wherein the Lord
could speak face to face with mortals; through his angels, chosen for this purpose, did the
Lord thus teach mortals.

4. Persuading them to industries, and peace and righteousness, after the manner of the
I’hins.

5. Teaching them of the stars and sun and moon; showing them how to find the times and
seasons of the earth.

6. Inspiring them to observe the stars, and to name them, which names are preserved to
this day.

7. I have established landmarks, saith the Lord. What I do, man cannot do. I lift the
barbarian up; he giveth over his cruel practices by my command.

8. I call him to the observation of the stars, and he heedeth my voice.

9. Behold, O all ye that say there is no Lord, I have left a remnant of the barbarians. Go
try your hand. Let them that find the cause of the progress of man, to come of the earth,
go raise up the barbarian.

11. Jehovih said: My Lord, My God, go thou; call man to one thing to-day, and let him
worship it. And to-morrow call him to another, and let him worship it. For man shall fall
down and worship everything in heaven and earth. By trying them shall man know them.
For in the day of my glory, kosmon, man shall put away all worshipful things, save Me,
his Creator.

12. The Lord God said: Through the worshipful talents man can be raised up. Even as to
great learning, man will not pursue it till he first worshippeth it.

13. In the time of Osiris, the Lord named the stars in heaven after the legendary names of
Gods and Lords. And the Lord taught not that man should worship them, but that he
should learn their glory and majesty in the firmament.

14. But man forgot the Creator because of the wonder of His works. Even to this day man
inclineth to view as substantial and real, things that are seen, and to reject the All Potent,
which is Unseen.

15. This was the command of God (Osiris), for man should learn corporeal things as well
as spiritual. And I, the Lord, carried away the spirits of the dead, not suffering man and
angels to commune together. For heretofore they had done this, and so had, both, rejected
the higher heavens.

16. Jehovih saith: It is not the plan of My heavens for the spirits of the dead to remain on
the earth forever, engaging in mortal servitude and practices.

17. Behold, the way of My kingdom, is upward; rather shall man on the earth seek to rise
upward, than that the angels of heaven go downward.

18. Hence the Lord carried away the spirits of the dead, and he turned man’s judgment to
learning the glories of the lower kingdoms (corpor).

19. And man advanced in great learning; both of the sun, moon and stars, and of all things
on the face of the earth.

20. The Lord said: These signs have I given to man, that he may comprehend the cycles
of his Creator. When spiritual research is chief amongst men, they advance not in science,
nor art, nor inventions, that belong to the earth. But, when man is bereft of spiritual
aspiration, he advanceth in corporeal knowledge, and inventions, and investigations.

21. These signs foreshow the changes being wrought on mortals by the hand of the
Almighty, through His Gods and Lords.

22. God said: Behold, I raised up great kings and queens on the earth; and I gave them
pageantry, and rites and ceremonies, after the manner of heavenly things. And these I
made as an aspiration to the multitude, that they might learn to provide themselves with
the luxuries of all created things.

23. For I desired not that man should become spiritual until the earth and all manner of
savage beasts and serpents were subdued. Otherwise man had descended into impotence,
and failed on the earth.

24. These testimonies have I left before thee to this day; that the spiritual man inclineth to
shut himself up in seclusion and prayer; but that the Osirians go forth to work manfully.

25. The Lord established reciprocities between kings and queens in those days. And this
was the manner thereof:

26. The central kingdom was called the sun-kingdom, and the others were called
satellites. And the chief ruler was called THE SUN – KING, or KING OF THE SUN.

27. And the king maintained an observatory, for determining the times and seasons of the
sun, moon, earth and stars. The name of the observatory was TEMPLE OF THE STARS
(Oke’i’git’hi).

28. The Lord said unto man: Build thou a chamber unto God within the temple of the
stars.

29. And man so built it. And the Lord chose seers, one for every STAR CHAMBER;
and the seer sat therein, with a table before him, on which table sand was
sprinkled. And the Lord wrote in the sand, with his finger, the laws of heaven and earth. 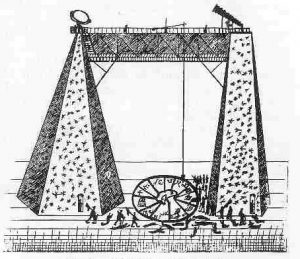 30. Thus gave God to man the names of the stars, and their seasons; and the seasons of
the sun and moon and earth.

31. And the seer gave it to the king; and the king proclaimed the words thereof. And God
gave man sacred days, for feasts and rites and ceremonies; according to the times of the
moon and stars gave he them.

32. And the king, by command of God, caused the people to watch the stars and moon
and sun, so they would know the sacred days.

34. So man took to learning from the stars and moon and sun, to ascertain the will of
God.

35. And nowhere in all the world prospered man in the Osirian philosophy as in Parsi’e,
and in Jaffeth (China), and chief of all were the shepherd kings.

1. Great became the wisdom of man in that day, and his power and glory were greater
than had ever been in all the world. He established mighty kingdoms and sub-kingdoms,
over the lands of Jaffeth, and Shem, and Parsi’e, and Arabin’ya.

2. He excelled in building temples and palaces; and in all manner of inventions; in fabrics
of linen and silk, and wool and find leather; in writing books and tablets; in mathematics;
in laws and reciprocities; in navigation, and in inland travel; in making thermometers and
barometers, and magnetic needles, and telescopes and microscopes; in chemistry and
botany.

3. Verily did the philosophers of those days know the mysteries of heaven and earth.

4. And man became no longer thankful to God and his Lords; but man became conceited,
saying:

5. The Gods are fools! All things are Nature, and of growth. Man had become wise in
spite of God and his Lords. All things evolve into higher states; it is the natural order.
Neither is there any All Person, Jehovih! He is void, like the wind.

6. And God saw the conceit of man, and he said: Behold, he that I have raised up, turneth
against me. Now, verily will I go away from man for a season, that he may learn wisdom.
Behold, man shall also find that many of his fellows whom he raiseth up, turn against
himself.

7. So the Lord departed out of the star chambers; and, lo and behold, the places were
filled by the spirits of the newly dead, who knew not the heavens above nor the way of
the Almighty.

8. And man inquired of them, thus: Behold, thou art now a spirit! Tell me, is there any
God, or Lord, or Jehovih?

9. And the spirits, desiring to flatter man, and, withal, not knowing the heavenly
kingdoms, answered, saying: Nay, there is no God, nor Lord, nor All Person, Jehovih!

10. So the kings issued edicts, commanding the people to no longer worship God, nor
Lord, nor Jehovih!

11. But woe, for the judgment of kings and queens. Man, having inherent worship in his
soul, ceased indeed to worship God and his Lords, and even Jehovih; but, instead, he took
to worshipping the stars.

12. Now, the spirits manifesting in the temples, advised one thing through one seer, and
another through another; for they were of little knowledge, and wholly unorganized.

13. So, presently, the kings took to war against one another. Anarchy ensued, and man
fell to destroying all the glories he had made.

14. Thus again, after three thousand years, man went down in darkness; again fell under
the obsession of drujas, and again became a barbarian.

END OF THE LORDS’ FIFTH BOOK