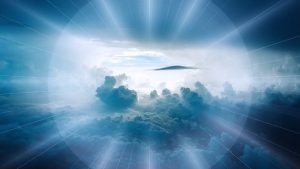 The Angels of the Creator reveal:

That human beings on this planet are living at the bottom of an ocean of Mind which is composed of the minds of past undeveloped inhabitants of the earth.

The majority of these minds or spirits are selfish, un-aspiring, and un-progressive. They vibrate in sympathy with the lowest qualities in human minds, and thus cloud and depress noble motives and hinder spiritual progress.

This great mass of human spirits impinges upon all human natures without exception. They are a cause of disease, decrepitude, and other human ills. They keep, the Creator from expressing through humanity, impeding growth and the expression of its higher potential.

There is a well organized kingdom of emancipated human spirits above this ocean of undeveloped spirits, whose collective desire and purpose is to educate these un-progressive spirits and to free humanity from the depressing weight of their presence.

They need a fulcrum for their spiritual lever.

This host of Angels needs the spiritual strength generated by benevolent human minds on earth to enable it to reach and resurrect these earth-bound spirits to a higher state of mind.
Through organized groups of co-workers on earth fulfilling the principles of intercommunication, the Angel Hosts can concentrate a power of love through human organisms which will melt the astral envelope of mortal desires from these undeveloped spirits. Thus freed from contact with mortals, these spirits will enter a place conducive to a higher State of Mind in which they will be educated to express the Creator’s image in them in order to become radiant angels of love.

When this ocean of undeveloped spirits is removed and human minds are no longer swayed and influenced by them, the divine image in everyone on earth will begin to shine forth with wisdom and power, and humanity will create a social order so expressive of the spirit of goodwill that all will live in peace and prosperity.

The angels of the Creator reveal that modern systems of healing by means of medicine, thought, prayer, faith or psycho-analysis do not recognize or remove the impinging spirits which, by their presence, depress human minds, and devitalize and destroy physical bodies.

Doctors, ministers, healers, psychologists, and metaphysicians are as much affected by these spirits as are those whom they try to heal; and all ultimately succumb to their weakening influence.
The miracles of healing accomplished by any spiritual, religious, or metaphysical method are due directly to the cooperation of those spirits with human thought or faith.

These methods of healing do not resurrect the divine image in spirits or in those they heal, nor do they resurrect spirits to higher states of mind; consequently, whatever the physical effects, both mortals and spirits are still bound in self-seeking states of mind.

The religions of the world cannot save people from the influence of selfish sprits nor attune them to the Angelic Hosts because the majority of teachers of religion do not believe it possible for angels to communicate with mortals. They do not understand how to fulfil the spiritual conditions for conscious inspiration from the angels, which would give them the revelation of the Science of Intercommunication. Consequently, there are no human religious leaders fulfilling the conditions whereby the Angels can manifest the Creator’s Power and Wisdom among humanity.

Human religious leaders are unconsciously influenced and guided by the limited religious beliefs of the past, and they are limited in their ability to seek in their souls for the inspiration of the Almighty.

The Angels of the Creator reveal:

How their heavenly organization can communicate and cooperate with groups of men and women on earth who will devote their lives to fulfilling the Purpose of the Hosts of Angels.

Men and women can concentrate with the Angels to help them remove the spirits which impinge upon human minds, and thus neutralize the disease processes which are caused by the presence of spirits.

Large groups of human concentrators can give the Angel Hosts sufficient mental force in this lowest state of existence (so foreign to the higher Angelic state) to enable the Angels to reach and remove vast numbers of selfish spirits who perpetuate religious bigotries, national hatreds, and selfish autocracies among humanity.

The cooperation of organizations of mortals and angels can help bring into existence the peace and prosperity of the world which preachers, politicians, and educators have aspired to but failed to accomplish through centuries of effort.

Every member of this Ministry who develops their spiritual talents and powers under the inspiration and protection of the Hosts of Angels can outgrow the spiritual causes for mental and physical inharmony. They can also become mighty workers with the Creator and the Angel Hosts for the emancipation and education of humanity.

Those who cooperate with the Hosts of Angels to bring peace, health, and goodwill among humanity will become conscious of their immortality while yet in the physical body and, by their work, will be able to take their place among the labourers in the heavenly realms when they leave this plane of activity.