1. Es said: Now, whilst the Holy Council were still sitting in Paradise, a light, like a star,
came, and stood above the throne of God. And the Voice came out of the light, saying:

2. Behold, the false Gods are cast out, and sent unto their places.

3. Never more shall there be any other false God, or Lord, or Savior, to lead my people
away.

4. I am sufficient unto Mine own creations.

5. Let this, therefore, be the beginning of the kosmon era.

6. My people have settled the whole earth around, from east to west; the lands on the
western borders of Guatama have become inhabited.

7. Go, then, My God, My Son, open the gates of heaven unto mortals.

8. Let My angels meet them, and talk with them, face to face.

9. Behold, My etherean embassadress, Che’sivi’anathaotes, cometh in a sea of fire!

10. The ships of the etherean Goddess were seen descending from the higher heavens,
coming as an open ring, to embrace the whole earth.

11. Again, the Voice spake out of the light, saying:

12. I know no distinctions of men, of races, or sects, or doctrines, or past revelations. All
people are My people!

13. Open the gates of heaven; let my angels speak to mortals!

14. Swifter and swifter came the etherean archangels, till all the heavens of Paradise were
encircled in the love of the Almighty.

15. Then, God called out the legions who had the matter in charge, where mortals had
been born for the work of Jehovih’s kingdom. And God said:

16. Open the gates of heaven; let the angels of heaven speak with mortals; the time of the
Father’s kingdom is at hand!

17. Open the gates of heaven! Let the angels come forth in power!

18. And in Hidesville, in Guatama, on the earth, the angels opened the door in Jehovih’s
name, to be not closed again forever, forever! 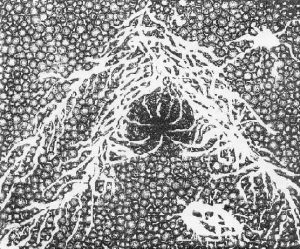 Plate 91. ARC OF KOSMON.
Showing the earth in the thirty-second year of the kosmon era. Jehovih said:
When the world approacheth dan’ha in Sabea, the nations shall be quickened
with new light; for kosmon cometh out of the midst. And my etherean hosts
shall press upon the understanding of men, and they shall fill all the nations and
kingdoms with new discoveries and inventions and books of learning. And
men shall be conceited of themselves above all the ages past, and they shall
deny Me and quarrel with My name, and cast Me out. But I will come upon
them as a Father, in love and mercy; and My hosts of heaven shall cause babes
and fools to confound the wise, by signs and miracles. My hosts from heaven
shall cause chairs to speak; and inanimate things to walk and dance. The dead
shall re-appear to the living, and talk with them face to face, and eat and
drink, and prove themselves to the children of earth, and make My kingdoms
known. Yea, they shall encompass the whole earth around about with signs and
wonders, and set at naught the philosophy of men and the idolatries of the
ancients. For both, the living and dead, shall know that I, Jehovih, live and
reign over heaven and earth. This shall be a new era, and it shall be called,
kosmon, because it embraceth the present and all the past. Then will I
reveal Myself; and they that deny Me shall accept Me; of their own accord
will they put away their Lords and their Gods and their Saviors; nor shall they
more have idols of Me, either on earth or in heaven, for I am sufficient unto all.